Its Monday morning at about 6:50 am.  I wake up to the sound of birds, beautiful sunshine, and the not-so-gentle snores of the boys in my cabin, Loggers 2.   The boys are all still asleep after night well spent at the Council Ring for campfire.  We stayed up late telling stories and laughing.

Now, at 7am, I turn on the music to wake the boys up.  I choose Johnny Be Good, one of my favorite songs.  Groggy and amazed its morning, the boys get out of bed and hit the shower house.  The energy levels slowly begin to increase until its hard to believe its only 7:10 in the morning.  You’ve got to have energy for this job – trust me.  After showers I make sure they haven’t left their things behind.  You would be amazed how often they lose their belongings!  Scratch that, if you’re a parent you already know fine well.

Flag raising is at 7:50 am.  We have to be up to make the “hollow square.”  So the whole village is gathered together – this week we are not going to be late (the girls were late this day).  The boys all line up and flag goes off with no interruptions – except for the light saber battle that erupted at the end, but this is summer camp.

My boys are still in awe of the fact that I am from Ireland.  The best question I’ve ever been asked by a camper, “was it hard for you to learn English?”

The boys all line up before entering the dining hall.  The CIT’s sing a camp song – and I enjoy this opportunity to bust out a good camp song.  The rule is the straightest line gets to go in first.  The girls are always better at this and I don’t quite understand why, but who am I to question this.  Maybe we should practice?

Anyway, everyone makes it into the dinning hall and places are taken around the table.  Monday morning is when class lists are given out among the staff and the boys go through the roof.  Ben, my co-counselor, is sitting with our boys.  He puts together a list of activities for each lad to keep with them so they know where they are going throughout the day.  Breakfast is a pretty quick affair.

As its Monday, Loggers 1 & 2 “Hop” the dinning hall (hopping is a combination waiting tables and sweeping floors – at camp, everyone pitches in).  We’re counting on Loggers 3 to win us the Cleanest Village Award by ensuring the shower house is nice and clean.  Parents, you wouldn’t believe, but your children do a good job at cleaning when the chance to win an award is up for grabs!

Once the dinning hall is “hopped”, we head back to our cabin, make our beds, and ensure we have all that we need until lunch time.  This morning, 3 of my boys have sailing.  They had their stuff together before breakfast so they could leave right after.  Lucky boys.   I wish them well, but I kind of wish I was heading to the lake.  It’s a nice day, as well, so the water will be nice.  The other lads had an assortment of different classes this morning.  Ben and I have 12 year-old boys this session in Rovers 2, so a couple chose trap shooting, and the others were all doing ultimate frisbee. 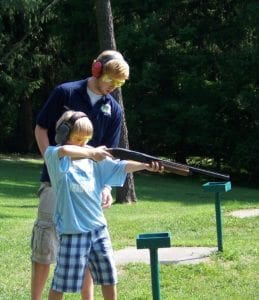 This morning I went up to trap to check on my boys.  As the Shooting Sports Director, I have responsibilities which allow me the opportunity to venture up and see how everything is going.  I love watching these lads try something new.  That’s what camp’s about!  One of my boys had his birthday today and he had just turned 12.  It was his first day on the trap range and I stayed to watch him take his first shot.  To my joy he hit the clay on his first shot – feat that eludes even the most experienced shooters!

At the end of the first 2 class periods, just a few minutes before lunch, I am in the Watch Office sorting through the camper mail.  Everyone is calling to me through the window asking, “Did I get any mail?”  My response is always, “you’ll have to wait and see.”

Lunch begins just like breakfast with cueing up (lining up) outside the dinning hall and waiting to be dismissed to eat.  To my astonishment, the boys have arranged themselves into the straightest line and are allowed into the hall first.  We remind everyone to sanitize their hands.  Lunch today is one of my favorite meals it includes: Breaded chicken strips, french fries, and peas – the salad bar is also available.  The boys are all chatting about their day thus far and about what they will be doing later.  One of our boys can’t eat the chicken strips but Chef Pat has a special meal already waiting.  Pat takes good care of us.  With the high temperatures of this summer, all campers are being encouraged to drink as much water as possible and to keep their water bottles on them at all times.

Lunch goes over well with the added entertainment of the electric piano placed at the fireplace.  Anyone who wishes to play it is welcome to share a song.  I wish i could walk up there and burst out a tune but alas my talents do not stem as far as that.  One of the staff, Jesse Ru, shows off with the classical stuff and some very talented campers play, as well.

With the end of lunch we return to the cabin for rest hour.  Rest is the last thing on any of our boys minds, but Ben and I are prepared.  To keep the boys indoors during rest hour (which is whole point as it’s the warmest part of the day), we have a game with playing cards I think they will enjoy.  Rest hour goes over quickly (too quickly for the staff), and before we know it it’s 2pm.  Time to head back to the A Field for the next 3 class periods.  We ensure the boys have their bathing suits for 5th period swimming – which they chose to do together with me.

Third period had the boys going to all their chosen classes once more.  They were in mountain biking, wall climbing high ropes.  I wouldn’t be seeing my guys again till 5th period when we would be going to the pool for a well-deserved dip to cool off.

The energy levels expended at camp are like those of climbers scaling Everest.  Staff and campers becomes super heroes in the high temperatures.   The are like the athletes you see at soccer games – you would think the World Cup was at stake.

5th period comes around and my boys, Ben and myself head to the pool.  They are buzzing with the prospect of jumping in and getting cooled off.  I myself won’t be enjoying the water quite like them – I am lifeguarding.  But before anyone gets into the water I have a quick dunk.  After swimming we head up to the dinning hall.  Now the prospect of tonight’s all-camp game is the question of most interest.  They hope for Capture the Flag or Predator-Prey.   The new campers are wondering what Predator-Prey is like.  “Wait and see,” is always the response so as not to spoil the surprise.

After dinner, flag lowering conducted by the Officer of the Day – another Camp Conrad Weiser tradition.  This is followed by instructions of the All Camp Game – Capture the Flag (the cheers could be heard back in Ireland, I reckon).  Teams are announced.  Our team is required to find bandana to tie around our wrists.  Some of the boys don’t have this item and were worried this would result in their dismissal from the game.  On the contrary.  Ben, ever-prepared, has a stash of bandanas for the boys much to their joy.

The game was a hard fought battle.  You and I can recall such battles as this – where the world is at stake and it all depends on getting the opponents flag to your side of the field (why this sport isn’t on TV is a mystery to me).  Both sides give all they can.  The guards are doing their best protect.  Campers fly about the field to get to the flag and make it back to their sides, while at the same time people are being rescued from the jail with a rapid “123 this jail is free!”

I, myself, am trying to make it to the gosh darn flag, but with my blonde hair stand out.  Any approaches I make are quickly rushed upon by that of no less than half the camp (I may be exaggerating, but not by much), at which point I am hastily returned to the jail where I seem to be frequenting all to often (my lads are none to impressed by this).

In the end we are all exhausted but in high spirits as we are sure we won.  We head back to camp stopping in with Mr Kirby to get any evening meds.  My request for oxygen is shot down.

We return to the cabin and the boys get their stuff together to head back to the shower house.  It is now 9:15 pm.  Showers are taken.  Teeth are brushed.  But the night is still young and tonight is our night to take the “Smugglers Challenge.”  I won’t go into too much detail on this epic game as to keep the mystery alive, but let’s just say it was a long night that resulted in a regrettable loss for Loggers 2.  Sorry boys.

Bed was a welcome end to the night.  We crawled into our sleeping bags around mid-night.  The boys were all out immediately.  All I heard as we went to sleep was a murmur, “what are we doing tomorrow?” and “today was the best ever.”  Much more to come boys much more to come . . . .

This is a typical day at summer camp from the perspective of an Irish Summer Camp Counselor, Jeff Henry.  Then again, there is no such thing as a “typical day” when you’re at Camp Conrad Weiser.  I am approaching my fourth summer here on the mountain and understand the joy camp brings me and how much camp does for your kids.  There isn’t another place in the world where your kids have the opportunity to learn and express themselves quite so much.   I look forward to seeing you and your campers on the mountain this summer when we can create some memories that last a lifetime.