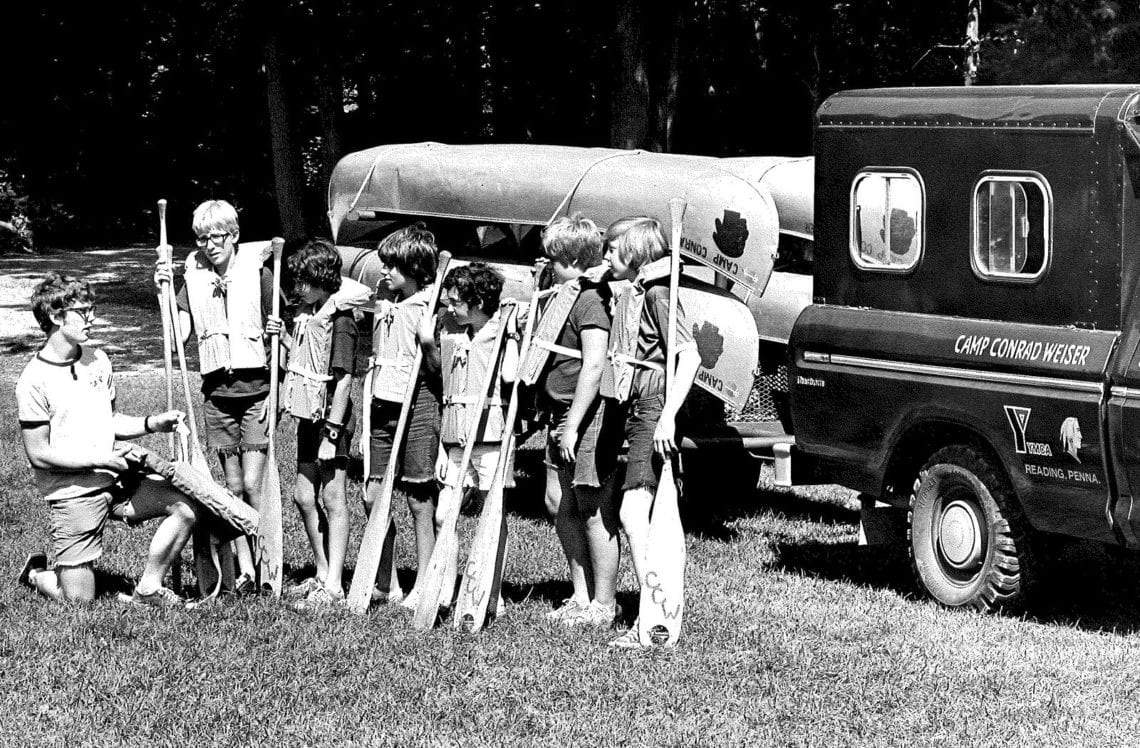 The history of the South Mountain and its resort-era begin in the last half of the 19th century. Homes used as retreats by the wealthy, and several large mountain resorts were constructed on the mountain to take advantage of the curative water, the charming natural setting, and clean, cool air. The 600 acres currently owned by the South Mountain YMCA Camps were gifted to, or acquired, by the organization over the past 70 years.

Adolf Tafel became enamored with the mountain air, as it relieved the asthmatic condition he developed while serving in the Union forces during the Civil War. On a 100-acre Cushion Peak parcel purchased in 1877, Mr. Tafel build a 16-room mountain retreat. The magnificently furnished home stood on the foundation that is now the grassy field and climbing tower for the South Mountain YMCA Camps. Mr. Tafel died in 1884. From that time on, the retreat was abandoned by his family but lovingly tended by George Freeman, an honest and trusted head workman for the Tafel family.

Mr. Freeman and his family lived in a splendid home of their own not far from the Tafel mansion. The house, named Crossroads Cottage, still stands on camp property and has been used as the home for our Executive Director or Camp Director. One of George Freeman’s daughters, Elsie Freeman-Sheetz became a benefactor of the South Mountain YMCA. Upon her death in 1983, part of her estate was made available to the YMCA for capital improvements and camper scholarships.

In 1888, John Tolbert of Philadelphia purchased the property. It was used as a summer residence until his death in 1896. For the next 2 years, the Luden Family of Reading used it as a summer home until the property was converted into a summer resort operated by the Tolbert heirs in 1898.

In 1905, Dr. Octavia Krum, a physician from Pottstown, purchased the property across Cushion Peak Road from the Tafel mansion, where George Freeman’s home stood. She operated the property as a small sanatorium until 1920. Dr. Krum, a proud and independent woman beset by financial difficulties would not accept the help offered her by Mary Morton, a friend and former patient. Miss Morton, the daughter of Levi Parsons Morton, became the recipient of a large inheritance when her famous father died in 1920. Mary eventually succeeded in purchasing Dr. Krum’s property through a third party, thus helping her friend recover her investment, as well as acquiring what would soon become known as Bynden Wood.

Miss Morton, attentive to the economic plight and social restraints imposed upon unmarried, professional women decided to operate the property as a resort where such women might vacation. While she expected to lose money on the venture, she hired an expert manager, Mrs. Rightson, who did manage to make a resort for professional women a profitable enterprise. During this era, Terrace and Roadside Cottages were built, as well as the Bynden Wood Lodge Tea House and gift shop. All three of these buildings remain and are used by the South Mountain YMCA Camps today.

The inspiration for the summer camp came from the late Ferdinand Thun, one of the founders of the Wyomissing Textile Industries, and Robert Miller, General Secretary of the Reading YMCA. The Reading YMCA had already sponsored a camp in Virginville and, in 1947, had a camp for boys in Earlville along the Maxatawny Creek. It was generally agreed that the camp at Earlville had outlived its usefulness in size and facility and Bob Miller led the search for a new site. That same year, in 1947, the Wyomissing Foundation (Thun Family) purchased the Bynden Wood Resort property and presented it to the Central YMCA in Reading to be used as a summer camp for boys. Part of the agreement required that the Thun Family would finance the construction of the initial buildings, residential villages and dining hall done so under the supervision of Charles Muhlenberg, Jr., an architect who was married to Mr. Thun’s daughter. Assisted by nationally recognized architects, Julian Solomon and Fred Shenk, the ambitious project began to take shape. Overall guidance in the planning and organization work was provided by the Bynden Wood development committee headed by Sidney D. Kline. Both Ferdinand Thun and Louis R. Thun contributed a great amount of time and effort to the work of this committee.

It was still a “pile of boards and a dream” when Uncle Mel arrived at the new campsite on Cushion Peak in February, 1948. Merrill J. Durdan (later to be known as Uncle Mel) was selected to direct Camp Conrad Weiser and came with the expertise and experience from Camp Morgan (New Hampshire) and the Worcester (Massachusetts) YMCA. The challenge presented many opportunities for dedicated layman and professionals to create a new camp for boys near Reading, PA.

In June of 1948, the camp opened for its first season with four villages constructed and a near capacity enrollment. Integrated into the program was a philosophy of work projects whereby campers and staff had a part in helping to develop the camp. As a result of this cooperative effort, many alumni feel an unusually close identity with the camp today.

In the years since, the Tafel Mansion and 300 acres that include Cushion Peak were acquired from the Cameron Family, and a beautiful 60 acre parcel which includes a pond was donated by Ms. Marilyn Martin. Additionally, the Masano family has gifted dozens of “buffer acres” to the Camp that were originally Galen Hall Resort properties. This brought our campus to approximately 600 acres.

Mel Durdan led our program for many years and is responsible for many of the traditions we still practice today. In the 1980s, after several short-term directors, the Y hired John Hebavny who served as Executive Director and then CEO for a decade.

In 1982, Mr. Hebavny led YMCA Camp Conrad Weiser to become a co-ed program. In 1983, the board of what is now the South Mountain YMCA (SMYMCA) purchased the Camp and its property from the Reading Area YMCA. It now operates as an independent camp and conference center chartered by the YMCA of the USA.

In the 1990s, SMYMCA hired Tom McGrath has CEO. Tom led the camps into their most prosperous period, culminating in a master planning process in 2001 by Schmidt, Copeland, Parker and Stevens. This plan called for 3 stages of development that would move the campus into the modern era, transitioning from platform tents and Adirondack-style shelters to cabins. In 2004, the SMYMCA conducted its first capital campaign led by long-time volunteers and alumni, Jim Kline and Dr. Jack Gruber. This successful effort allowed for the construction of 24 log cabins in 6 villages, as well as two new shower-houses in 2006.

In 2015, the board once again undertook a capital campaign effort to complete the second phase of the master plan with a renovated dining hall, new and renovated pool facilities, and the development of the Martin Property. While the final outcome of the campaign is still coming into focus, many outcomes can already be recognized. With a generous gift from Mr. John Post, the Martin Property will now be known as the Post Outdoor Program Center. Ms. Martin will receive recognition in our renovated Dining Hall.

There is still much to be written in the history of this YMCA Camp. We look forward to what comes next. Keep the Fires Burning!